You may have noticed that .NET won't let you change the Text value of a ComboBox during the SelectedIndexChanged event. This can be quite frustrating and difficult to work-around if you have want to update the ComboBox text during a when the user makes a selection. For example, you might want to back out of a bad user selection or bind each selection item with different formatting when selected. Let's clear up a couple things that will help us understand why .NET prevents us from doing what seems like a reasonable default functionality, and then we'll show one way to workaround this limitation.

When you select an item from a combo box, the SelectedIndex property of the ComboBox changes to the index location of the item you selected. The ComboBox Text property is automatically updated to the display value of the item at the specified index. This is the only update to the ComboBox Text that is allowed by default. To understand this, let's look at another out-of-the-box ComboBox behavior.

If you have a ComboBox populated with the following items:

If in our code we change the value of the Text to blue:

We can resolve this relatively easily by invoking a delegate during the selection changed event that will eventually change the text property. We'll load a generic WinForms window by adding two items to a ComboBox, one of which we want to reset the form when selected. This item represents a selection that may or may not be invalid, but is expensive to figure out, so we don't want to necessarily evaluate it early and remove it from the list before the user has a chance to select it. 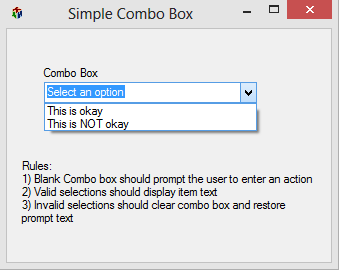 We'll start by declaring a Delegate Sub within our class. The only important thing about a Delegate is the method signature that you are passing in. Since we want to call the ResetComboBox method which contains on parameters, our Delegate will not contain any arguments as well.

On the SelectedIndexChanged event, we'll call BeginInvoke and specify that when it invokes, it should look to a method at the AddressOf ResetComboBox.

You'll notice that when ResetComboBox is eventually called by the delegate, it will also fire the SelectionChanged event when we change the SelectedIndex to -1. If there's a chance that you're handling anything in the change event that could cause a repetitive loop, you can include a private cancelAction boolean property in your class, defaulted to False. Then when you start the ResetComboBox method, set cancelAction to True and reset it to False at the end of method. In the selection changed event, exit the sub if cancel action will set and you will never accidentally execute code when you're resetting controls

You can find the source code for this application from SkyDrive. Please comment with any suggestions or questions